In issue 25 of May 2020, the magazine FEUERWEHR | RETTEN – LÖSCHEN – BERGEN reported on the use of MapTrip 112 at the Wuppertal Fire Department: 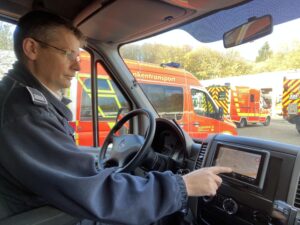 The fire department is also feeling the effects of social change. Employees are changing employers and places of residence more frequently. As a result, vehicle crews no longer know their way around as well. That’s why today’s fire departments also need good navigation systems to get them to the scene of an emergency as quickly as possible. 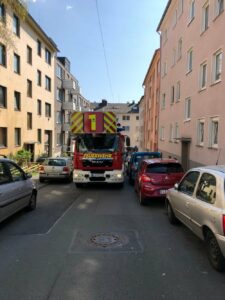 Streets that are too narrow and hinder quick access to the scene of an emergency are no longer an issue. Photo: Wuppertal Fire Department.

In the past, the Wuppertal fire department used map printouts to navigate through the alarm telegram. The firefighters navigated with city maps and plans and had to spend time searching the city map on the wall for the assignments.

Because one fire engine was losing valuable time due to a construction site, they switched to a digital solution in 2006: The Dalles dispatch system with the Da Vinci GPS navigation system. The Wuppertal Fire Department maintained its own road vector network for this purpose. This was used in both the operations control system and the navigation system. The proprietary routing system alerted vehicle crews to a possible route change with a pop-up window before the trip.

Another problem was that the vector network, which had been in use since 2006, could not easily be converted to the state of the art for newer navigation systems. The data basis for the new operations control and navigation system came from the company HERE. The fire department had purchased road maps there with the license to edit and adapt them. It is supported in this by the “Surveying, Cadastre and Geodata” department of the city of Wuppertal, which prepares the data for it. Together, they developed a procedure to bring the existing map material up to date. That’s why they were looking for a provider of GPS navigation software that could integrate their own road network.

Four providers were shortlisted during a search for a new GPS navigation system for fire trucks. The infoware GmbH from Bonn finally convinced with flexibility, functional range and price-performance ratio of their GPS navigation software MapTrip.

Adaptation of the road maps and map special rights

Especially the individual adaptation of the routable road network is essential for the fire department. This is because their navigation needs differ greatly from those of a normal private user.
Wuppertal’s Nordbahntrasse, for example, is a former railroad line that now serves as a bicycle path and footpath. A regular GPS navigation system would not guide you there in car mode. The fire department, on the other hand, must be able to navigate to such routes and pedestrian zones in the event of an accident. Regular GPS navigation systems, however, do not allow this. The use of the adapted road network is possible with MapTrip. The fire department can thus route to any location. This also applies to forest roads: in the event of an accident, the fire department must be able to navigate as close as possible to the injured person. This means that the emergency services sometimes have to cover the last 100 meters on foot with the GPS navigation system in hand. With a regular GPS  system, this would require switching to pedestrian mode. But the data records are often not available for this.

Short-term changes, such as a height restriction that makes an underpass impassable, can be entered immediately and new construction areas can be included in the road network as they are being built. Even bridges or tunnels, which may be used by the heavy vehicles of the fire department due to special rights despite a tonnage restriction, can be processed in the vector material. A main traffic route in Wuppertal, for example, leads through a tunnel in which no heavy traffic is actually permitted for fire load reasons. Temporary changes to the course of a road or street festivals can now also be taken into account. Backyards whose house number is closer to another street can be added to the street network at short notice.

The Wuppertal Fire Department differentiates between navigation for Germany and for Wuppertal. In this way, data can be processed more quickly on smaller maps with lower data volumes and construction sites can be implemented.

The new system has made it possible to optimize the overall routes for large vehicles. With vehicle profile-dependent (truck/car) routing, ideal routes can thus be found. Small, narrow streets, for example, are only traveled by fire trucks for the last 100 meters. In addition, a realistic speed is given, which is valid for a fire truck driving with special rights.

A normal navigation system cannot do this without switching between the different user modes car and truck. But this results in other, serious problems: The system would then use narrower roads that are not designed for a fire truck. And switching from passenger car to pedestrian or bicycle lane would possibly lead over pedestrian bridges or stairs

The fire department had problems with map updates for a long time, because no manufacturer could take their needs and special features into account. Updates often took place only after half a year or a whole year. This is, of course, much too late for the fire department. The year-long reconstruction of the Döppersberg as well as the closure of the Brändströmstraße have shown that the update on the release of the streets took several months or even years. If large providers have not yet included newly built roads in their road networks, accidents can happen there in particular. The fire department must be prepared for this. Today, the Wuppertal fire department is no longer dependent on external updates thanks to the individual adaptability of the navigation.

Now, before setting off, the vehicles receive an exact deployment address in the form of a coordinate from the deployment control system: Among other things, the type of alarm, tactical information and other useful tips appear on the on-board computer. In addition, the crews are shown all the resources involved, such as fire engines, command vehicles, the turntable ladder or the emergency physician. The crews only have to click on the navigation button. They no longer have to enter the deployment address manually. MapTrip then starts immediately. Coordinate routing saves the fire department a lot of time.

In addition, there is the possibility of the so-called rendezvous scene. For example, a delayed emergency ambulance can be navigated to a rescue vehicle that has already started moving and is no longer at the scene. All 115 vehicles of the Wuppertal fire department, including fire engines and ambulances, are equipped with MapTrip.

Poorly chosen routes, time delays due to unknown obstacles or missing updates are a thing of the past: “Thanks to the individual adaptability of the map material in the navigation software, we have a navigation system that leads us to the scene of the emergency quickly and with the optimal routing,” summarize Fire Chief Dirk Schucka from the Wuppertal Fire Department and Sandra Rickert from the Land Registry Office.